The outcome is a …

As a first step we build our embedded system based on Debian. The developers will write source code and push it to a git server. The image below only shows the master branches of the git repositories under the assumption that the developers are using something like git flow to collaborate and merge new features to the master branches: 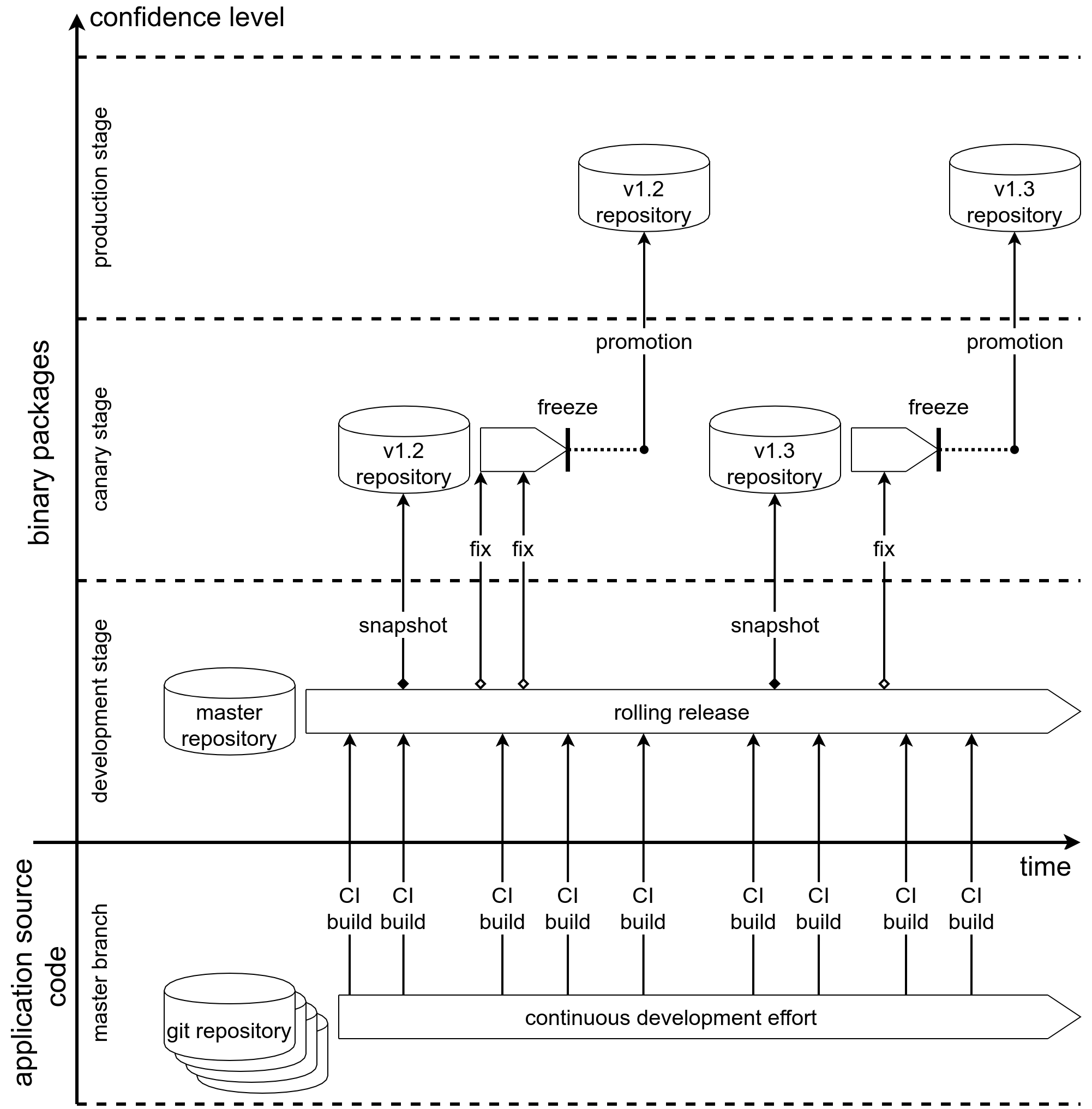 After every commit the CI toolchain will turn the source code into a binary Debian package and upload it to a development stage apt repository. The brave developer will of course always update his devices against this rolling release development repository and fix regressions that are eventually popping up immediately.

At certain intervals we do a snapshot of the rolling release repository. The snapshot shall be dispatched to a limited number of carefully selected canary devices to make sure that the new release is able to cope with the sheer amount of different configurations we have out in the field. Some regressions are still to be expected and selected fixes will be picked from the rolling release and added to the snapshot.

After we have made sure that no canary gets killed anymore we are ready to promote the unmodified snapshot repository to the production stage.

By using edi we will build images for each stage (development, canary and production). For each stage at least two types of images will get generated:

To streamline the supply chain we will provision the embedded devices with a generic operating system image with a well thought out partition layout:

The disk layout already foresees a redundant root file system partition that allows us to do major updates in a robust and reproducible way over the air. In our example we use Mender for this robust over the air update. The details are described in a previous blog post.

After the provisioning we will have a device that is able to cope with common concerns like over the air updates and monitoring. However, the specific use case still needs to get configured. The cloud folks already came up with good tools like cloud-init to customize cloud instances. For embedded devices there is still a way to go but brilliant engineers came up with highly scalable systems that are a perfect match for our requirements.

First we create a git repository that describes our fleet of embedded devices using inventories and Ansible playbooks: 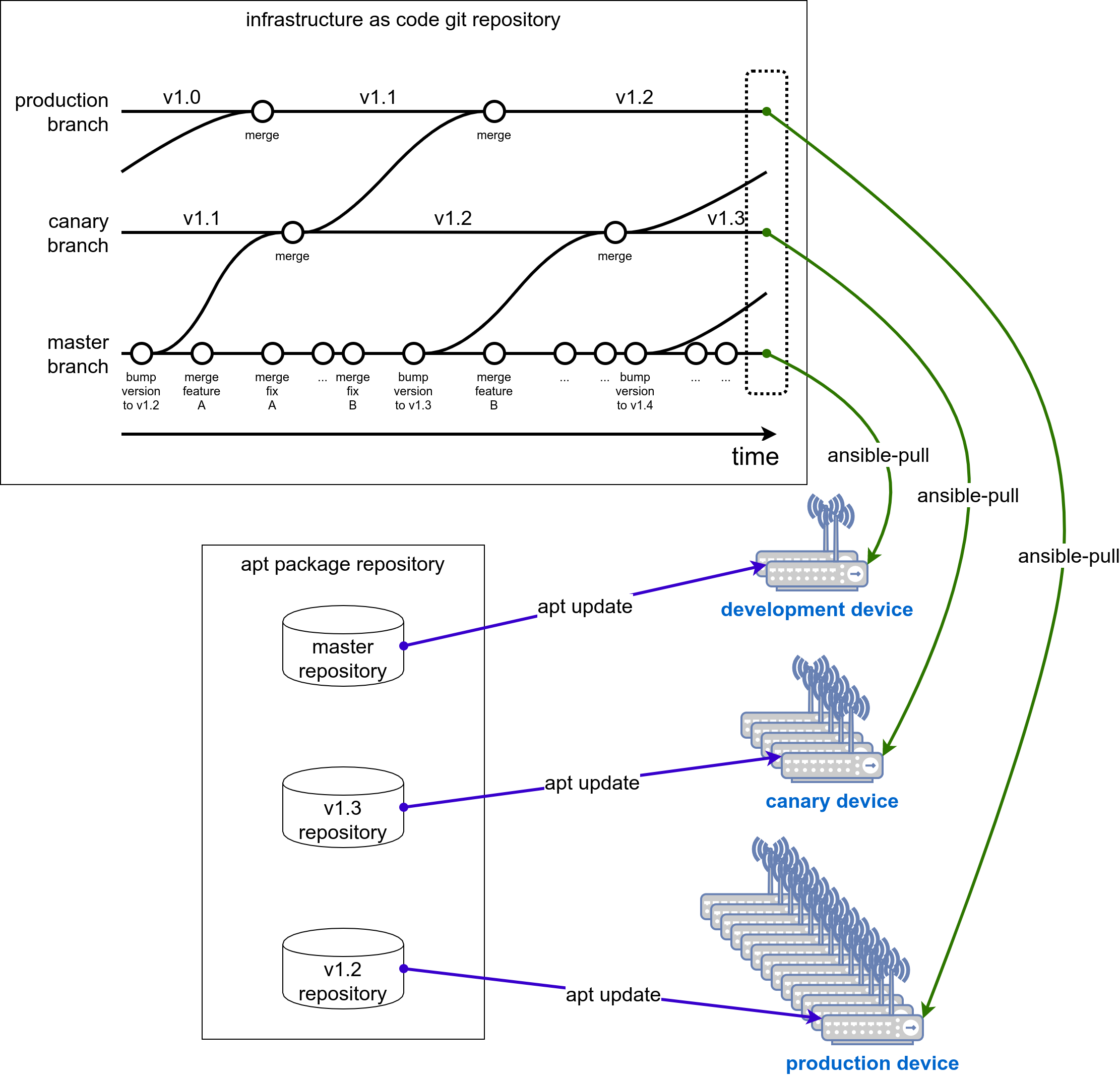 The different groups of devices get attached to different git branches.

At some point the developers are confident that the master branch works very stable and they issue a pull request from master to canary. Depending on the level of automation the pull request either gets approved manually by different stakeholders or by a fully automated process or by a manual/automated hybrid solution. After the merge to the canary branch the canary devices now will start to pull updates from a newer snapshot.

As a final step we have to monitor our fleet with appropriate tools like Icinga or Datadog.

Such tools are well known to operations people but they are equally beneficial for developers. Especially the canary devices require a very detailed monitoring to make absolutely sure that we do no serious harm to this lovely birds.

Also the developers might want to track their development devices and get some alerts if components are eating up RAM due to memory leaks or services get knocked out due to a firewall change.

All building blocks mentioned in this blog post are proven in use. Here they get combined to a robust, scalable system that is easy to maintain.

The dramatic change is, that all over the value chain the same tools get used. An operations guy no longer uploads a release to a shiny, dedicated device management system, selects a group of devices and dispatches the software to that group. Instead, he reviews a git pull request, hits the merge button and can peacefully enjoy after-work hours while the embedded devices will get updated gradually. The careful testing on the canary devices has given enough evidence, that the roll out will finish smoothly. If still something should go wrong, the powerful monitoring and alerting infrastructure will make sure that the operations guy returns to the office soon. In case something went amiss badly, there is still the possibility to re-provision the affected devices using Mender.

Also the developers will enjoy the powerful operations tools that help them to monitor the behavior of the latest development code.

The GitOps mindset is already very popular among the kubernetes folks but it makes a lot of sense for the embedded people too!

Getting Started with a new Embedded System

For a desktop PC you can usually just download a generic Linux iso image and install it on your off the shelf hardware. This is unfortunately not the case fo...

CI and CD for Debian and Ubuntu

Developing some new features for edi is the fun part. Releasing it for two Debian and three Ubuntu releases is the boring part and it took me around two hour...

Guessing from the number of clones on GitHub my cross compilation setup for Raspbian stretch still seems to be pretty popular. This makes it worthwhile to mo...

Development of embedded systems has become more complex over time and nowadays groups of developers interact with a lot of infrastructure to get the work don...