It is great to see that Debian/Raspbian/Ubuntu gets more and more popular in the space of IoT. Even the biggest companies like Microsoft adopt the Debian based operating systems.

As I am doing quite a lot of research in this area, I always wondered if those companies have robust update strategies for their edge devices.

I believe that package based updates with apt are possible to some degree with the following limitations:

Canonical is pushing Ubuntu Core and this operating system is built upon a robust update mechanism.

However, I wanted to bring such a robust update mechanism into my personal Debian based project. During my professional career I already developed such an update mechanism and from the gained experience I know that it is a complex endeavor. Therefore it was clear to me that I will base my solution upon a well thought out open source project instead of developing my own solution again. After a through evaluation phase I came to the conclusion that Mender is a great match for my project. The key selling points were simplicity of the solution, good documentation, a matching management interface, fully open source code and a good unit test coverage.

There is even a very valuable tool available that turns a Raspbian image into a Mender compliant image. I used this as a starting point to get to know how I can add the Mender update mechanism to my personal project.

After inspiring discussions and some days of work it is now possible to easily generate a Debian buster image for the Raspberry Pi 2 or 3 that comes with full Mender update support!

Here is how you can build the OS image and a corresponding Mender update artifact:

Building the OS Image and the Mender Update Artifact

First you will need to install the tool edi according to this instructions.

Please take a careful look at the “Setting up ssh Keys” section in order to be able to access your device by means of ssh.

The OS image build requires the installation of some additional tools:

To generate the Mender update artifact, the mender-artifact tool is required. Unfortunately it did not make it into the Ubuntu Bionic apt repositories. Luckily this package comes with a small number of dependencies and therefore it is without risk to download it from Debian and install it on Ubuntu Bionic:

If you would like to try out the full update capabilities, please sign up for a hosted Mender account. After a successful login you need to retrieve the tenant token (click on your user name in the upper right corner, choose “Settings” and select “My organization”).

Now you can clone the edi-pi project configuration repository from GitHub:

That’s it, now you can generate the full OS image and the Mender update artifact:

The resulting OS image can be copied to an unmounted SD card (here /dev/mmcblk0) using the following command:

Once you have booted the Raspberry Pi 2 or 3 using this SD card you can access it using ssh (the access should be granted thanks to your ssh keys):

or via local login using keyboard and monitor (the password for the user pi is raspberry).

Triggering an Over the Air (OTA) Update

Now we come to the fun part: Instead of removing the SD card from the Raspberry Pi and rewriting it we want to trigger an OTA update!

First we have to go back to our hosted Mender instance and “accept” our new device.

Mender is a clever software and if we would upload the update artifact we have created before and try to deploy it to our device it would just figure out that you have already the correct image version installed and skip the update.

As a shortcut we now create an image with a slightly updated timestamp:

Now we are ready to upload the Mender update artifact (see artifacts/pi23-buster-armhf.mender) to our hosted Mender instance and to deploy it to our Raspberry Pi.

After some minutes our Raspberry Pi has booted into our new OS deployment: 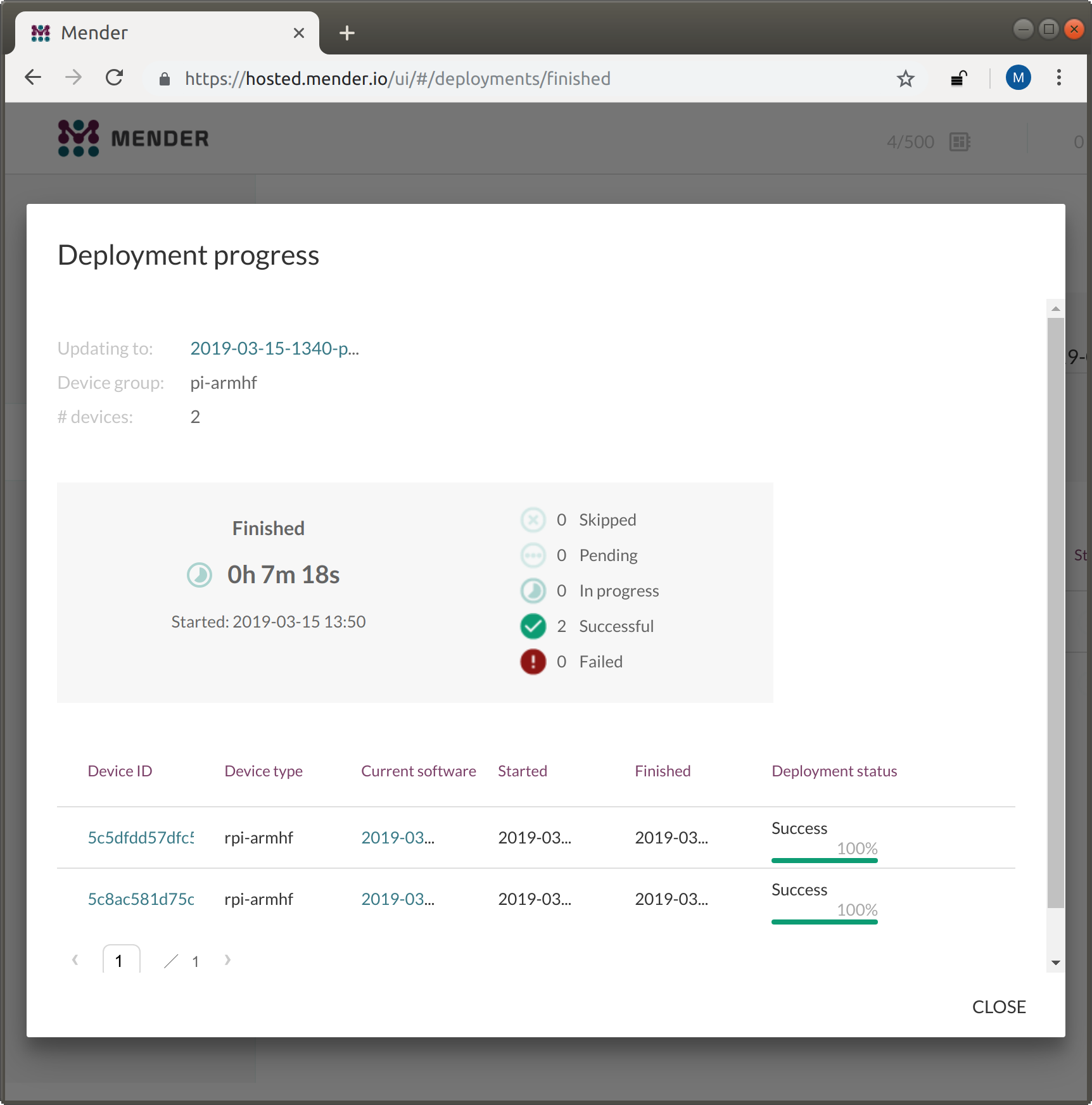 The people at Mender have really done a great job in developing a robust A/B update solution! If you would like to learn more about it then their documentation is a good starting point.

I have spent quite some time on a clean and clever Debian integration. The solution includes the following benefits:

I hope that this blog post is a small contribution to a more robust and safer IoT world where the devices get upgraded more frequently!

Beyond the Raspberry Pi

Imagine you have a great product idea and you start to implement it on the ubiquitous Raspberry Pi. Since you are already familiar with the Debian operating ...