An advertisement for the latest edi feature could read as follows: “Conveniently generate your tailored Linux image and get a (cross) development container for free!”

Here is how this looks like for the Raspberry Pi 3:

Given you have installed the tool edi according to this instructions (please take a careful look at the “Setting up ssh Keys” section since you will need a proper ssh key setup in order to access the container or the Rasperry Pi using ssh) and cloned the edi-pi project configuration repository from GitHub:

and installed a few extra tools:

To generate the Mender update artifact, the mender-artifact tool is required. Unfortunately it did not make it into the Ubuntu Bionic apt repositories. Luckily this package comes with a small number of dependencies and therefore it is without risk to download it from Debian and install it on Ubuntu Bionic:

You are now ready to generate a minimal pure Debian buster arm64 image for the Raspberry Pi 3 using a single command:

The resulting image can be copied to an unmounted SD card (here /dev/mmcblk0) using the following command:

Once you have booted the Raspberry Pi 3 using this SD card you can access it using ssh (the access should be granted thanks to your ssh keys):

or via local login using keyboard and monitor (the password for the user pi is raspberry).

You might think: “So what? There are plenty of scripts that can achieve this.”

This is correct and I even got inspired by those scripts. But I wanted to take the approach a step further by doing certain things a bit different:

OS image generation always involves time consuming steps that get boring when executed over and over again. Having this in mind, an important design goal of edi was to separate those steps in order to make sure that if a step fails, that the artifacts from the preceding steps remain valid. This helps to speed up the development of new OS images because the whole image can be developed step by step. While doing the later steps edi will directly reuse the artifacts of the previous steps without consuming time to re-generate them.

The resulting design is a pipeline of consecutive sub commands that looks like this: 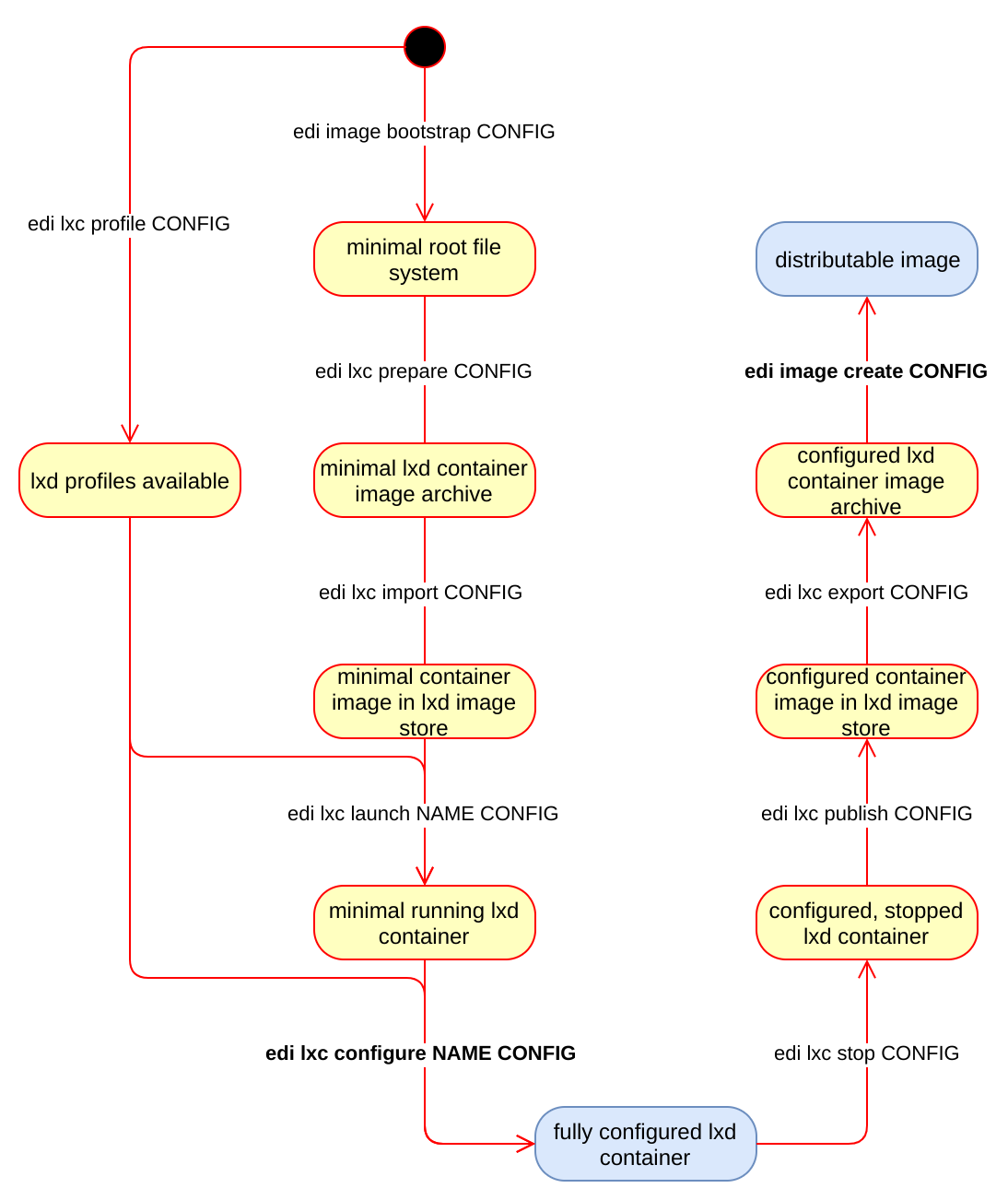 edi does not even try to be clever about (intermediate) artifacts: If the requested artifact is present it will take it, otherwise it will try to generate it. If you want to force the re-creation of selected artifacts, you can tell edi to recursively delete the artifacts of the given and the N preceding sub commands:

This command (here N=5) will remove most of the artifacts (up to and including the container) but e.g. the bootstrap artifacts will remain untouched.

A re-creation of the OS image with the same command as above will be a lot faster since the bootstrapping gets skipped thanks to already existing artifacts.

When creating OS images edi does not build upon a pre-built iso image but it starts from scratch using debootstrap. This has a beneficial effect especially for embedded devices since you can control all the installed packages right from the start and you do not have to remove any unwanted packages afterwards. Instead of customizing the minimal root file system within a chroot edi makes use of a LXD container. This has a positive impact during the engineering phase since a lot of things (including service startup and network setup) can already be fine tuned within the container. The customization of the image happens within the LXD container by means of Ansible. When all the customization has been successfully completed, the LXD container gets exported and some additional custom scripting converts the root file system into the desired image format.

The Vital Side Products

For embedded cross development it is desirable to make use of a cross compiler to reduce compile time. Thanks to the container based setup a single command is sufficient to generate a matching cross toolchain:

Furthermore and emulated arm64 container can be built with the following command:

The following picture shows an overview of the artifacts we have seen so far:

Now that we have a running Raspberry Pi and a cross development container we can do our first steps to design a highly sophisticated application:

Then we create a folder within the folder that is shared with the host operating system:

Now we write our groundbreaking application:

Since we are not sure whether we got everything right in such a complex scenario we compile and test it in the container first:

Now we are confident that it is worth compiling the application for the target system:

Next we leave the cross development container:

And we deploy the application to our Raspberry Pi:

Finally we run it there:

In the real world scenarios I have encountered so far it even turned out that most of the development and testing happens within the container.

The cross compilation and testing on the target device can then be automated and the developer does not have to fiddle around with real hardware during most of his development time.

Reusability was a key quality attribute for the design of edi. Therefore the edi scripting is kept separate from the project specific configurations. For increased readability an edi project is written in yaml and to allow parametrization the parsing of configuration files applies the Jinja2 template engine.

The configuration for the target image can be displayed using the following command:

As depicted above, the edi-pi project does not only allow you to generate a target image. You can also produce artifacts that are useful for development and testing. To support multiple use cases with a single project configuration edi allows you to fine tune each use case using overlays: 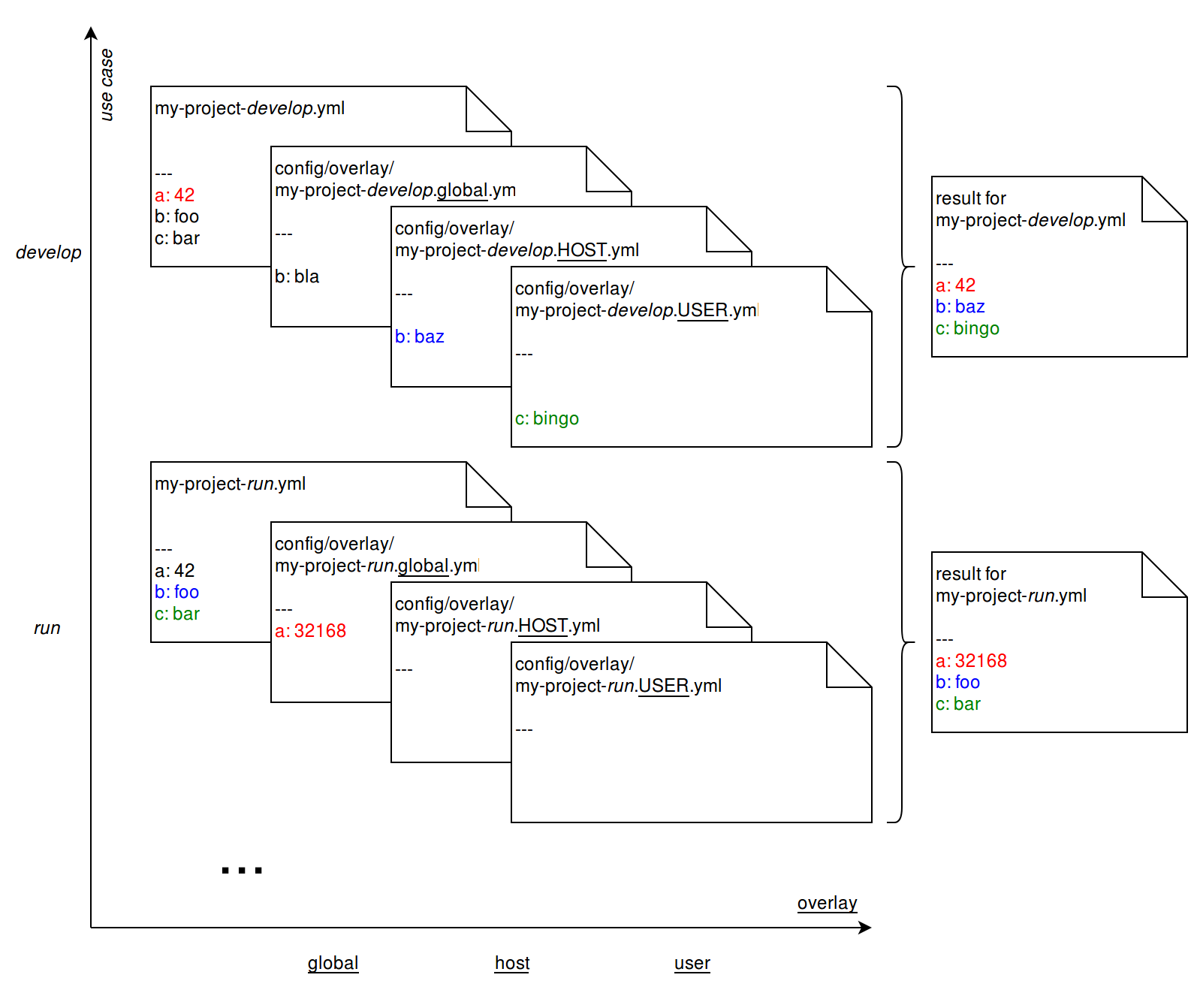 Finally plugins are used to make the different assets even better sharable across multiple project configurations. The plugins applied to the Raspberry Pi 3 image can be displayed using the following command:

The setup of the edi-pi project configuration was pretty straight forward for several reasons:

A big thanks goes to all the people that made this possible!

The really cool thing about the above setup is that you can do most of your image and application development within a LXD container. The matching cross development container comes as an (almost) free gift.

The approach outlined above is not at all limited to the Raspberry Pi 3. You can easily adapt it to other popular boards such as the BeagleBone black, the Compulab IoT Gateway or any other board that is powerful enough to run Debian or Ubuntu.

Although edi was initially designed for embedded projects it is generic enough that it could also serve in other areas: For example I am pretty sure that it is feasible to produce fully tailored images for Amazon, Azure, or name your favourite cloud provider here!

What do you think about the above approach? Your feedback is appreciated!

I came across a few cool things while preparing this blog post:

Furthermore this blog post is based on my previous posts:

If you are interested in the gory details you can continue reading here:

Beyond the Raspberry Pi

Imagine you have a great product idea and you start to implement it on the ubiquitous Raspberry Pi. Since you are already familiar with the Debian operating ...