The following sketch depicts the setup of the self-hosted runner: 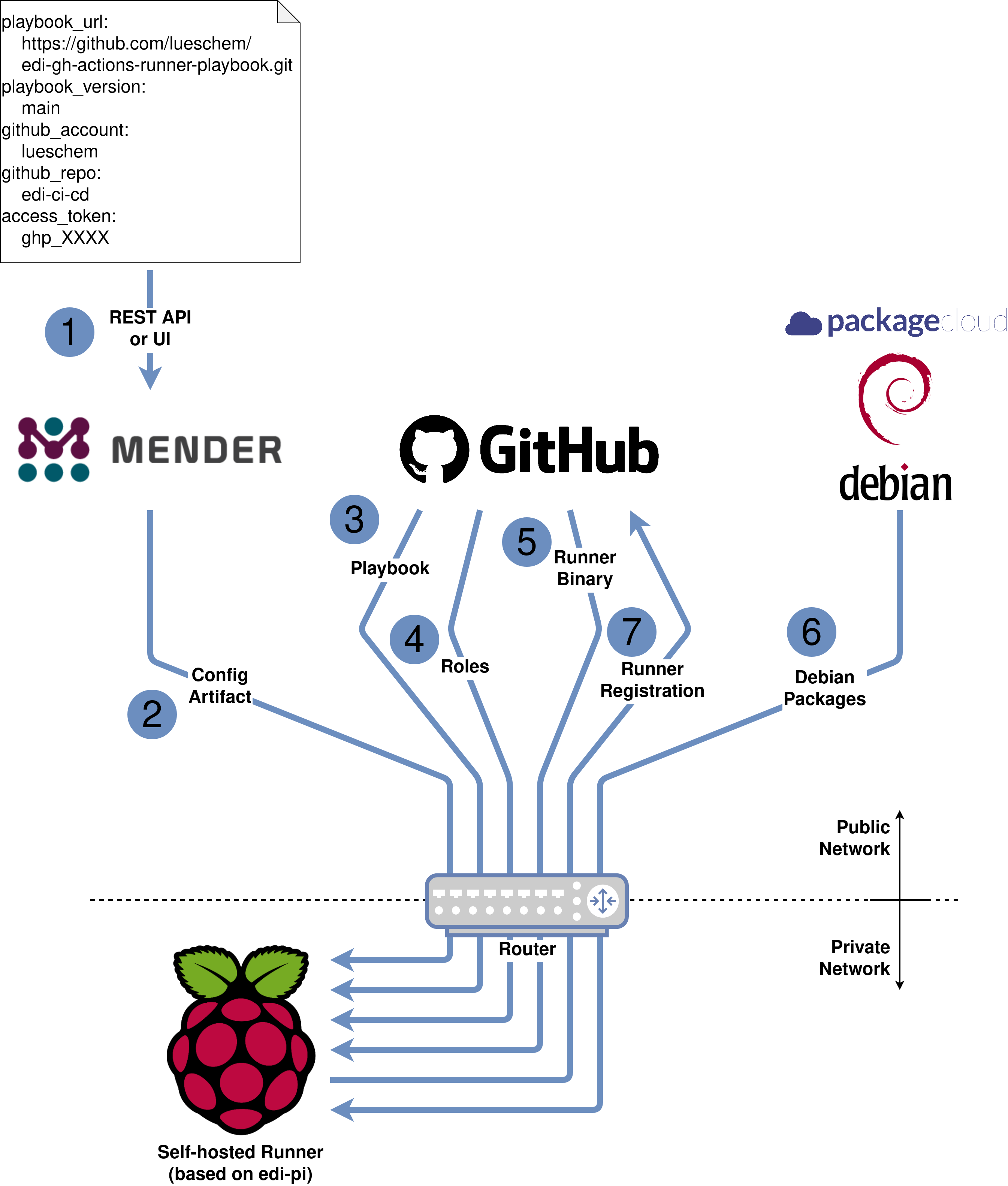 As a prerequisite a GitOps ready Raspberry Pi 4 got flashed (see edi-pi, command sudo edi -v image create pi4-bullseye-arm64-gitops.yml). However, this time we do not turn the Raspberry Pi into a kiosk terminal. Instead, we choose to go with a different configuration and enter the following key/value pairs using the Mender configure add on (step ①): 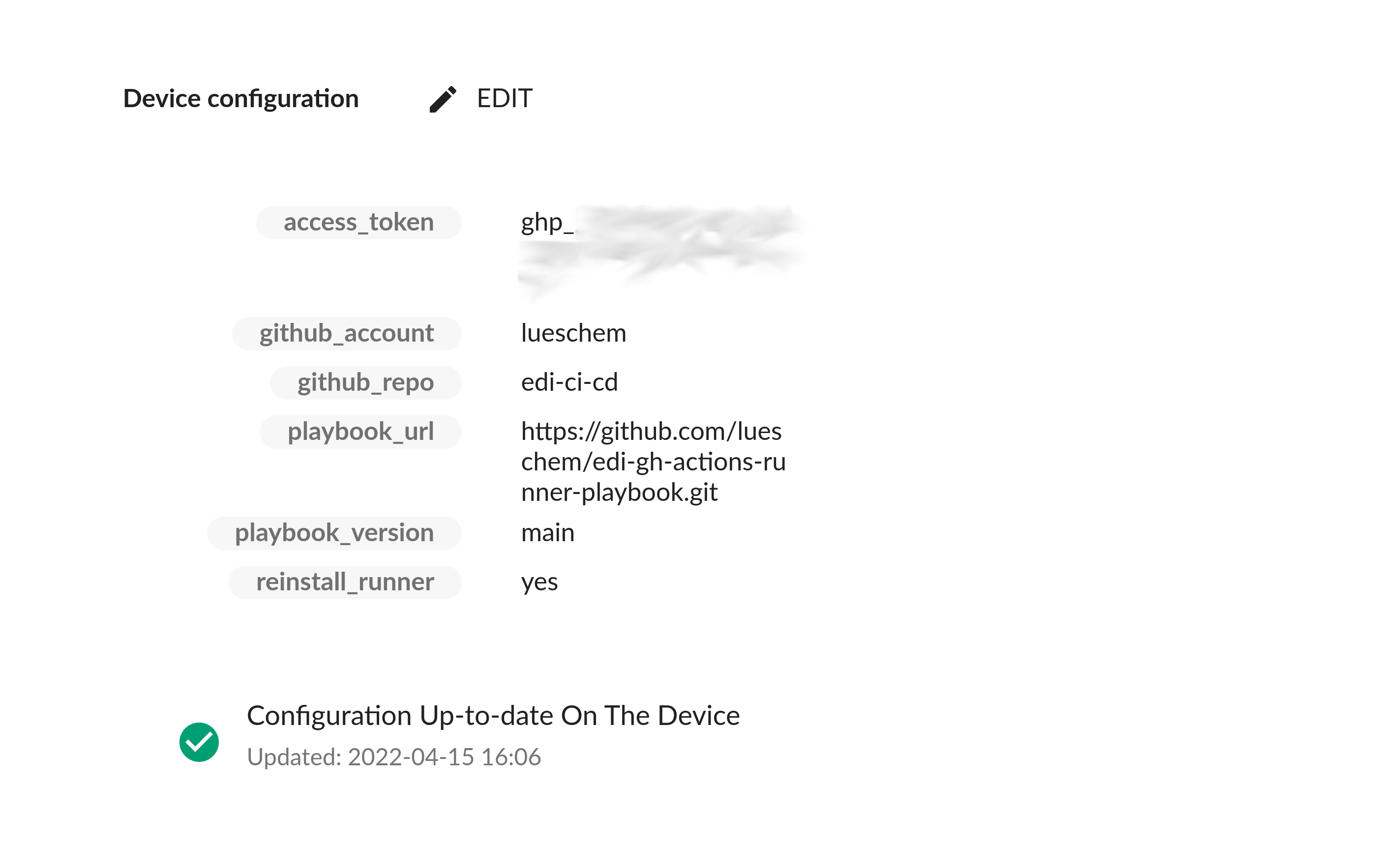 Accordingly - after receiving the config artifact ② - the device will clone the playbook edi-gh-actions-runner-playbook ③ (main branch). The playbook itself makes use of two roles ④:

The roles will then fetch the runner binaries from GitHub ⑤ and a lot of Debian packages from the upstream Debian repositories and the edi PackageCloud repository ⑥.

If something should go wrong, then the Mender remote terminal add-on might be useful: 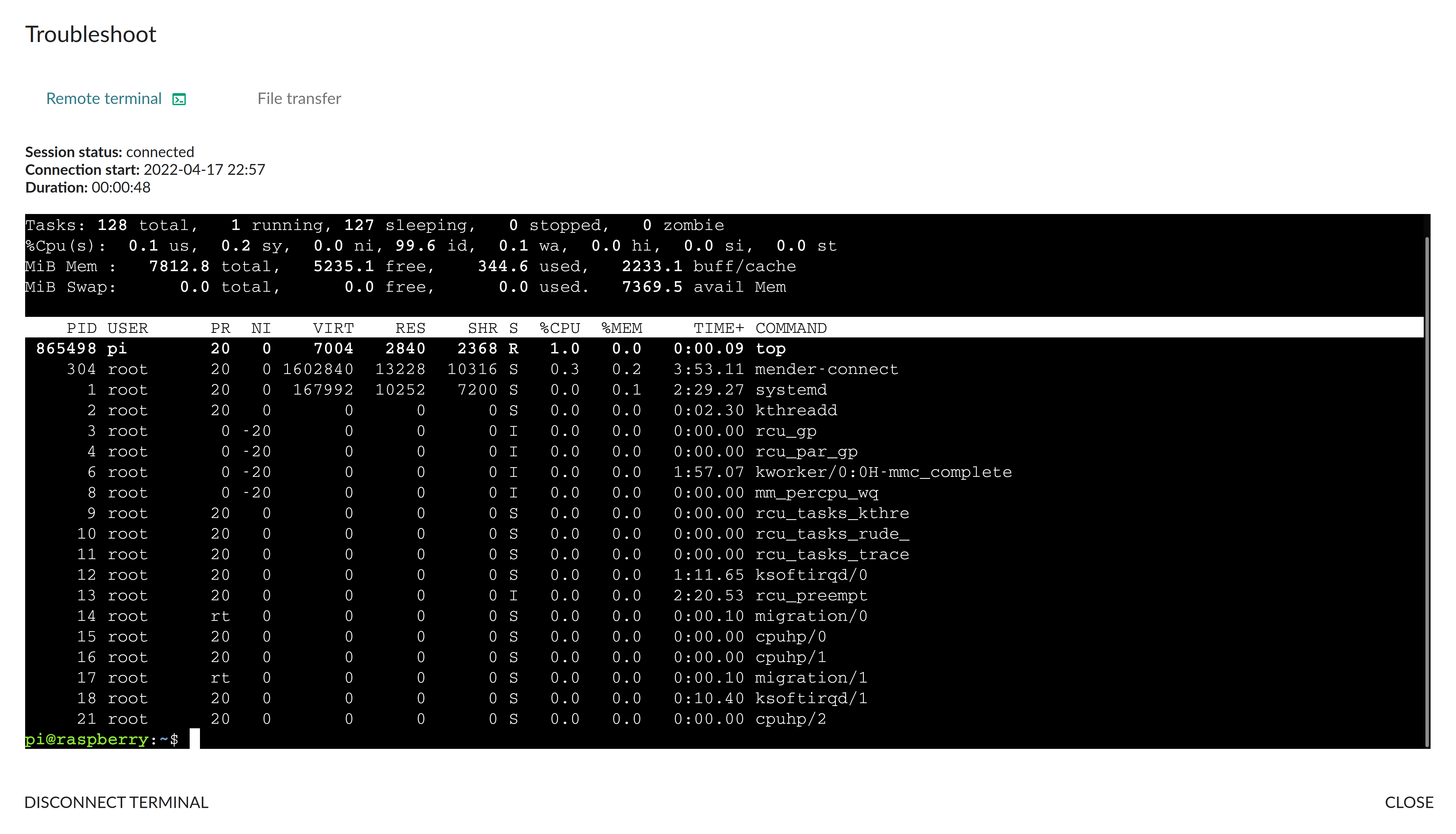 However - once everything is properly setup - nothing should go wrong anymore and the self-hosted runner will connect to the edi-ci GitHub repository:

Please note that the edi-ci project is a private repository according to the GitHub security recommendation. In order to still make the setup transparent, I provide the cloned repository edi-ci-public.

As a bonus even a complete OS update on the runner is possible and the whole setup will get re-applied thanks to this commit.

Using the self-hosted runner we are now able to trigger our OS build, dispatch and test workflow: 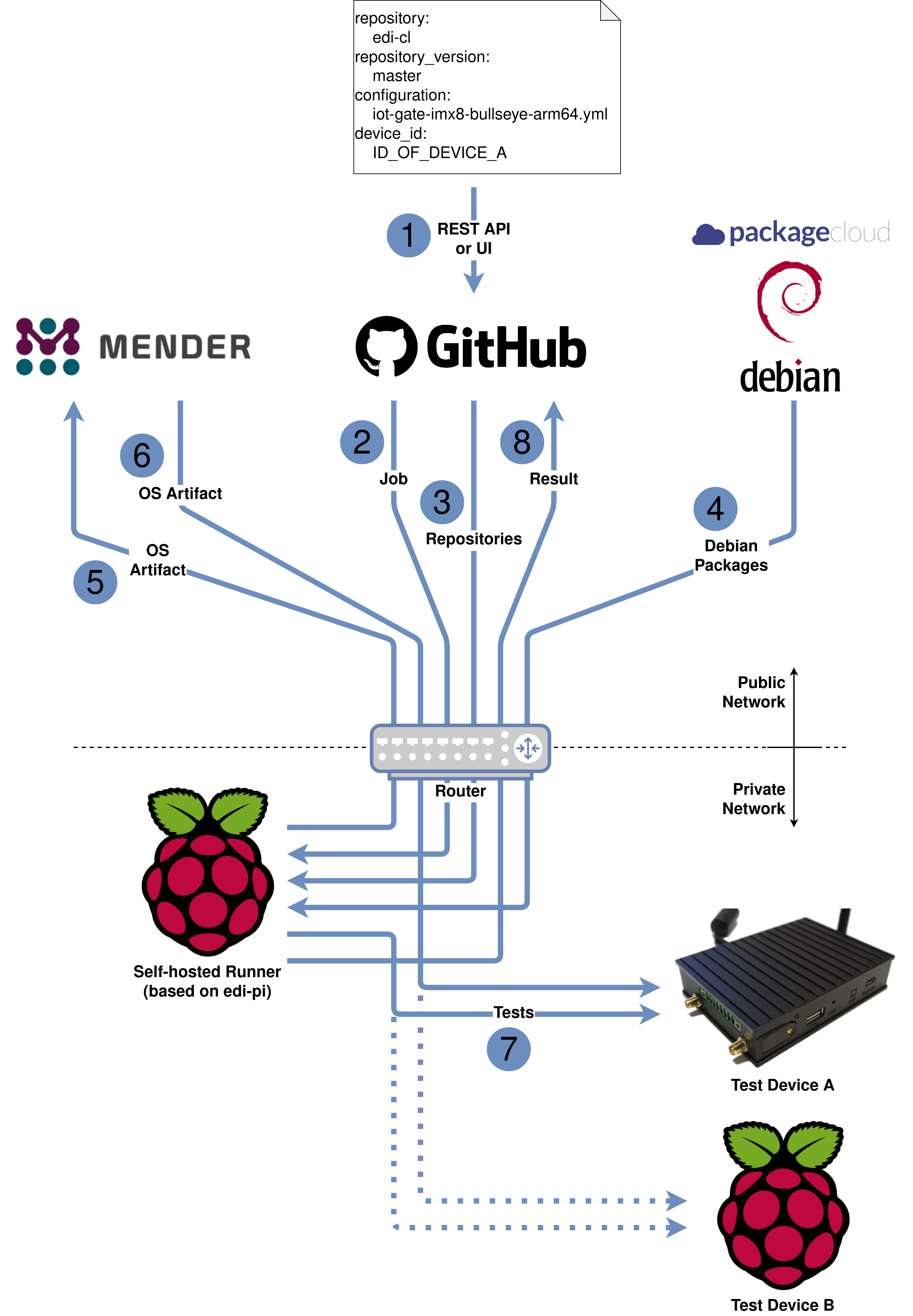 As a first step (the only manual step) we tell the workflow which configuration (here iot-gate-imx8-bullseye-arm64.yml) of which repository (here edi-cl using the main branch) shall be applied to our chosen device (referenced by the Mender device id) ①: 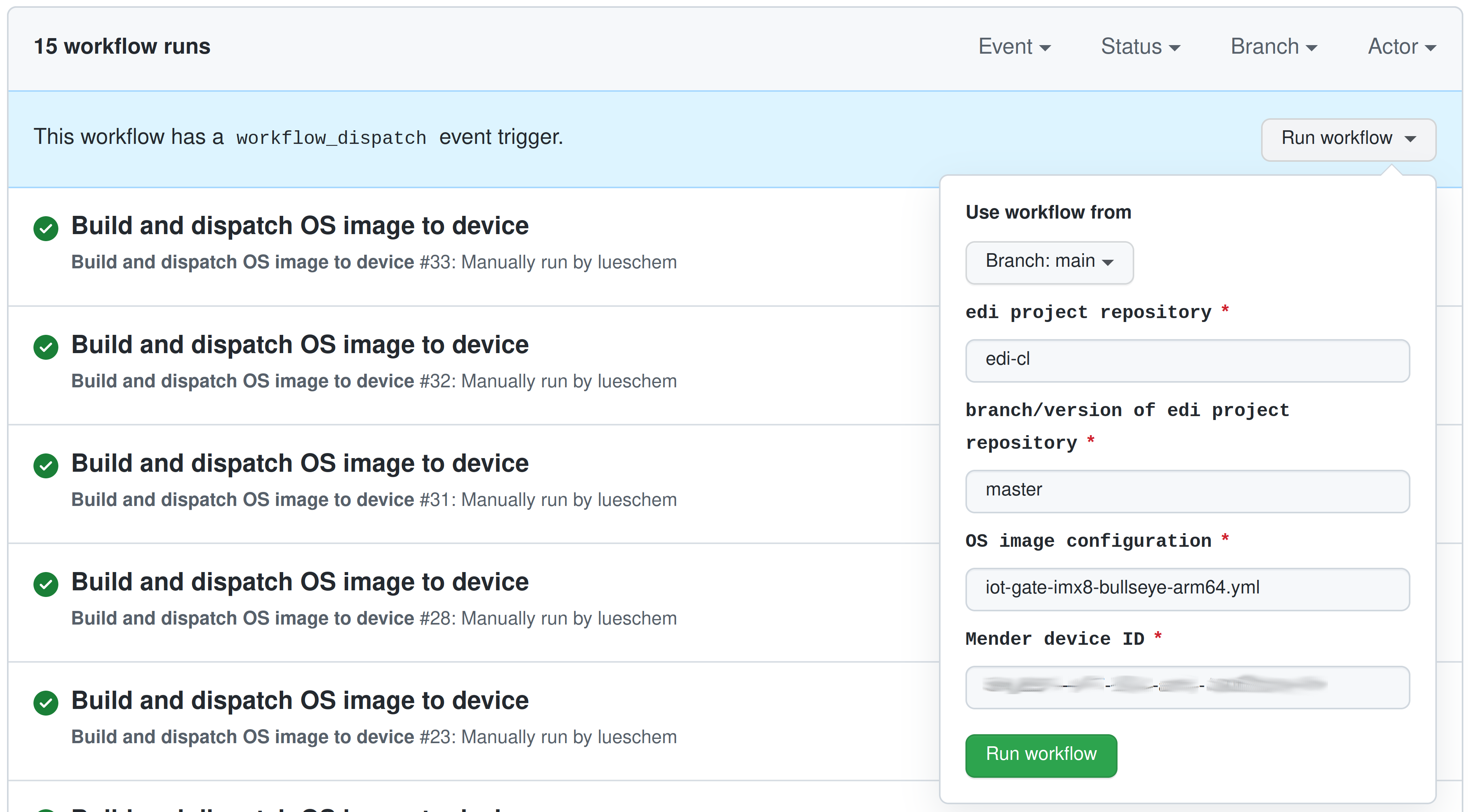 The job will then be sent to our self-hosted runner ②. The runner will check out the source code of edi-ci and the specified edi project configuration (here edi-cl) ③. edi will then take care of building the specified OS artifact (here iot-gate-imx8-bullseye-arm64.yml) from scratch. During this process a lot of Debian packages will get fetched from various Debian repositories ④. Using the Mender REST API the resulting Mender OS artifact will get uploaded to Mender ⑤ and then dispatched to our chosen device ⑥.

After our test device got successfully updated, we run some tests that are based on pytest and Testinfra ⑦.

Testinfra is a pretty powerful pytest plugin and - as an example - the following test makes sure that all systemd services are running properly on our test device:

Another test checks that our root device got properly resized and comes with the expected mount points:

The result of the whole workflow gets nicely presented on GitHub ⑧: 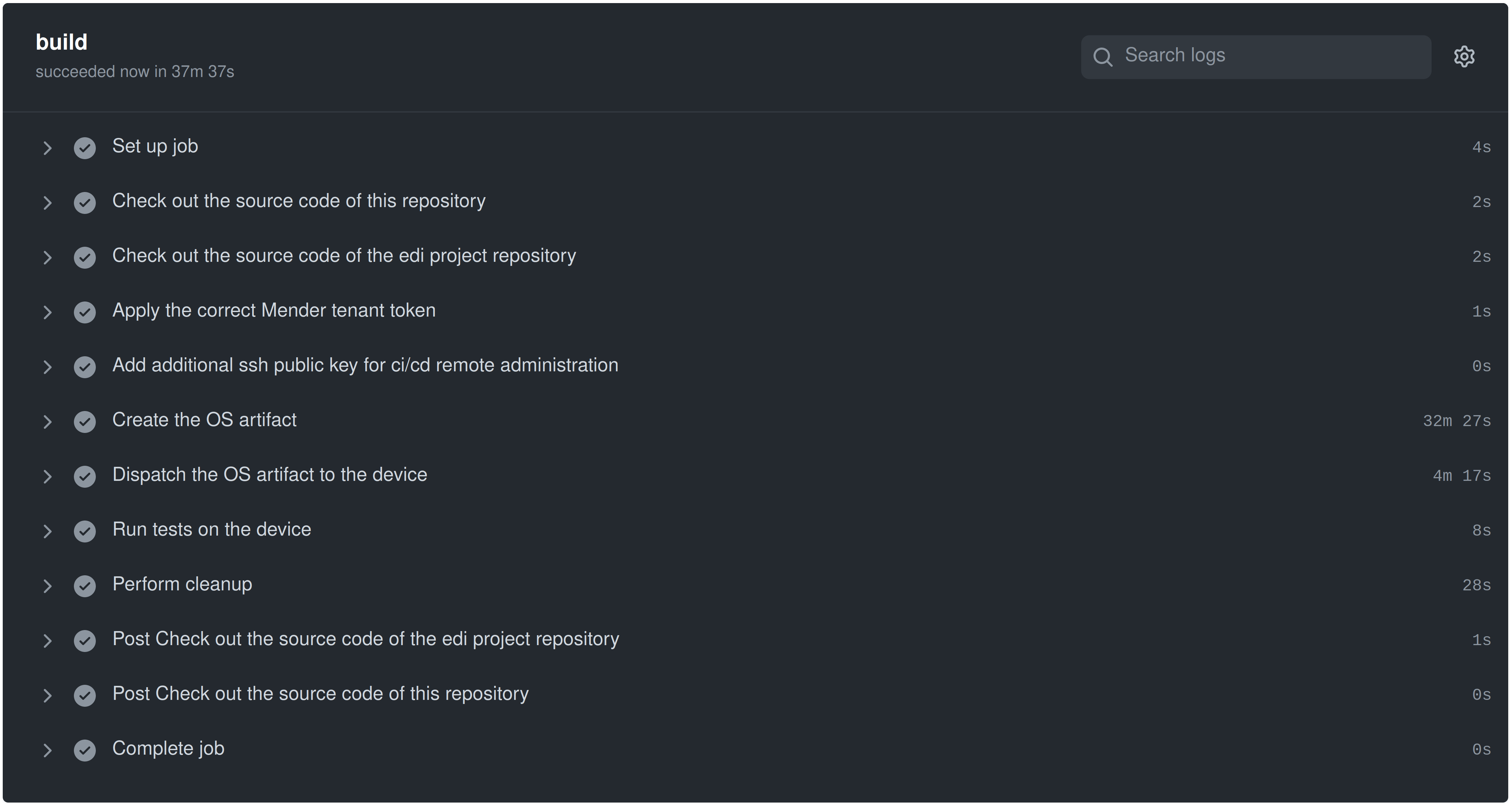 The attentive reader will now ask the legitimate question: Where does the workflow know the various credentials from?

Using GitHub Actions you have the possibility to store encrypted secrets.

I have summarized the required secrets here.

After having completed all this automation, I can now enjoy the flow of the bike trail while my edi OS workflow is running. If something should go wrong, then a GitHub e-mail will make me aware that I have to fix something once I am back home.

The whole stuff presented here should be helpful also for other edi based projects. Apart from GitHub Actions I did not introduce any new technology. Instead, I was re-using already familiar tools (Ansible, Mender, Debian, pytest and edi) and hardware.

It should also be fairly easy to use Jenkins or GitLab instead of GitHub Actions.

Customizing the Hostname of a Raspberry Pi - Featuring ChatGPT

It was on my TODO list since a long time: For my GitHub Actions runner setup I need unique hostnames per Raspberry Pi so that I can scale up to multiple runn...

In this blog post I explore Debian testing - the current development state of the next stable Debian distribution. The next stable release will be called boo...